On October 30th the SASHI team in India was invited to conduct a mental health awareness programme with the Police department in Chamarajanagar District. One hundred and ten police officers of varying ranks attended the event, which focused on raising

awareness about self-harm and introducing the SASHI project.

The participants felt that the session helped increase their understanding of self-harm and that it was important because the topic was rarely discussed. 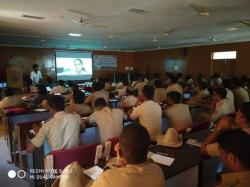