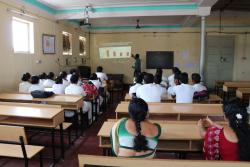 Dr Sumanth and Sudeep conducted awareness session on Self-Harm and Introduced SASHI project to the 3rd year Nursing students at MMC&RI on 14th May 2019.

The program was held at nursing college at MMC&RI, Mysore.

A total of 28 nursing students attended the session.

The group interacted and discussed well for the questions that were put forth.  The session mainly focussed on the explaining: 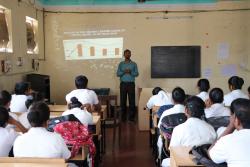 In the end of the session, SASHI project was introduced. Aims and objectives of the SASHI project was briefed to the participants. They were also told about the research possibilities in self-harm as a part of their academic thesis which can be mentored by the SASHI team and asked to contact SASHI team further for more information.

The group responded positively by telling that the session was helpful. The faculty also requested for similar session for another batch.